The primary objective Inter-Barangay Christmas Carol Competition is to showcase different barangay’s singing talents and skills. And since this is in choir format, it also hopes to foster creativity in blending voices to produce elegant music, particularly Christmas songs.

II. Participants
1. The contest is open to all barangay singers/choir in Lingayen, Pangasinan
2. The singing group/choir shall be composed of ten (10) to fifteen (15) members only. The members may either be male or female, all male, or all female, regardless of sex orientation.
3. The voicing of the parts (Soprano, Alto, Tenor and Bass) refers to the appropriate ranges as sung by a mixed (male and female) choir. It does not refer to the gender of the singers singing those parts, thus a
3. Only bonafide residents of the barangay shall compose the singing group/choir.
4. In case of newly transferred member, he/she should/must have stayed/resided in the barangay for not less than six (6) months. His/her residency should/must be vouched by the Barangay Chairman through a letter to be submitted to the concern contest committee not later than December 10, 2012.
5. Individuals who have joined/participated in any singing contest prior to the said contest are allowed to become member of the singing group/choir representing the barangay.
6. No entrance fee shall be required among the participants to be able to join the contest.

All winners of the Inter-Barangay Christmas Carol Competition will receive the following. 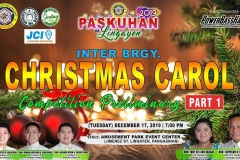 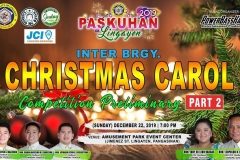