According to the Treasurer’s Office data, collections for real property taxes (RPT) and local income, which include business permit fees, as of January 20, 2020, reached to over P44.96 million, or 29.66% higher than the 34.6 million collection for the same comparative period in 2019.

For the business permit fees, cut-off for regular payment set in last January 20. Thus, to those who have been paying their business permits from January 21, 2020 and onwards have already been incurring penalties.

According to Mayor Leopoldo N. Bataoil, those who would be renewing occupancy in the market stalls are given until this month of January to settle their obligations. Further, the stall owners, as named in the contracts, would be issued formal letters of demand for them to either assume their respective business operations or to transfer titles to their lessees.

He said that those who are named in the contracts of lease with the municipal government should be the ones to process their business permits and assume liabilities and privileges.

Meanwhile, the local government unit of Lingayen urged tax payers to pay their RPT not beyond March 31, in order to avail of the 20% “early bird” discount and to avoid surcharges and penalties.

Last December, the Treasurer’s Office reported that the first six (6) months of the incumbent administration was a breakthrough in terms of income collection.

Local income collection for the period July 1 to December 31, 2019 has a total increase of 56.77% or about P9.64 million with collections reaching as high as P26.61 million, compared to only P16.97 million for the same period last year.

Of this increase, over P5.74 million came from stall rentals while P1.755 million was from goodwill collection.

This huge increase can be attributed to the established open communication lines between and among stakeholders involved in the development of the local economy.

Every portion of this collection is being utilized to provide services to the public, the local chief executive vowed. (MIO) 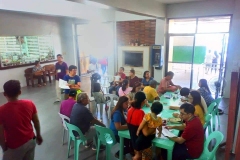