The Local Government Unit of Lingayen had successfully conducted Basic Life Support seminars and training sessions in the thirty-two (32) barangays to strengthen the public awareness of and preparedness to various natural disasters, such as typhoon and earthquake.

The orientation was attended and participated in by all barangay officials, tanods and health workers.

The training/seminar, covers various types of natural disasters and situations during the aftermath, like destroyed properties and recorded number of casualties.

Participants were informed of the assigned evacuation areas in every barangay, the importance of preparedness and several basic life support skills that they can use in time of emergencies.

The said orientation aimed to expand the town’s campaign to increase the survival knowledge of people and reduce the risks when disasters strike.

Mayor Leopoldo N. Bataoil believed that the said seminar and training sessions could enable barangay officials to properly handle and deal with emergency scenarios and capacitate the community. He likewise commends the efforts of the LDRRMO in sharing their knowledge and skills in the grassroots level.

“Every barangay could have huge contribution to a much quicker and more efficient response to the needs of their constituents in case of emergency”, Mayor Bataoil added. (MIO) 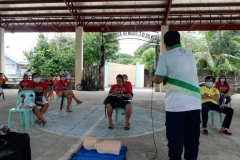