LINGAYEN— No less than the Secretary of the Department of Transportation (DOTr), Arthur Tugade, inspected the Pangasinan Port Cluster Development Project today (June 10, 2021) in the capital town.

The project includes the construction of a rock causeway, including a stairlanding in Brgy. Capandanan and riverlanding in Pangapisan North; and a more functional docking area.

From a 30-minute ride, the travel time through the maritime transport is now down to three to five minutes, with the ride now more comfortable and convenient.

Sec. Tugade, in his inspection and visit in the province, was accompanied capital town Mayor Leopoldo N. Bataoil.

The bridge will primarily benefits the Western District constituents of the municipality, especially those of Barangays Balangobong, Capandanan, Estanza, Malimpuec and Sabangan by providing easy access to the Central Business, Secondary and Tertiary Schools, and Institutional/ Government Services.

Likewise, the infra-project is seen as a remedy to decongest traffic situation along the national road, while complying with DILG Memorandum Circular (MC) 2020 which prescribes that tricycles are banned from traveling on national highways.

The underpass in Barangay Pangapisan will serve as an extension of the Lingayen Baywalk and a pathway towards the Limahong Tourism Center, Bataoil added.
Meanwhile, these are the following commitments of Sec. Tugade to Mayor Bataoil and the people of Pangasinan: 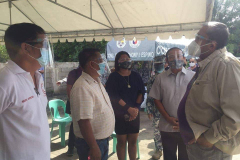